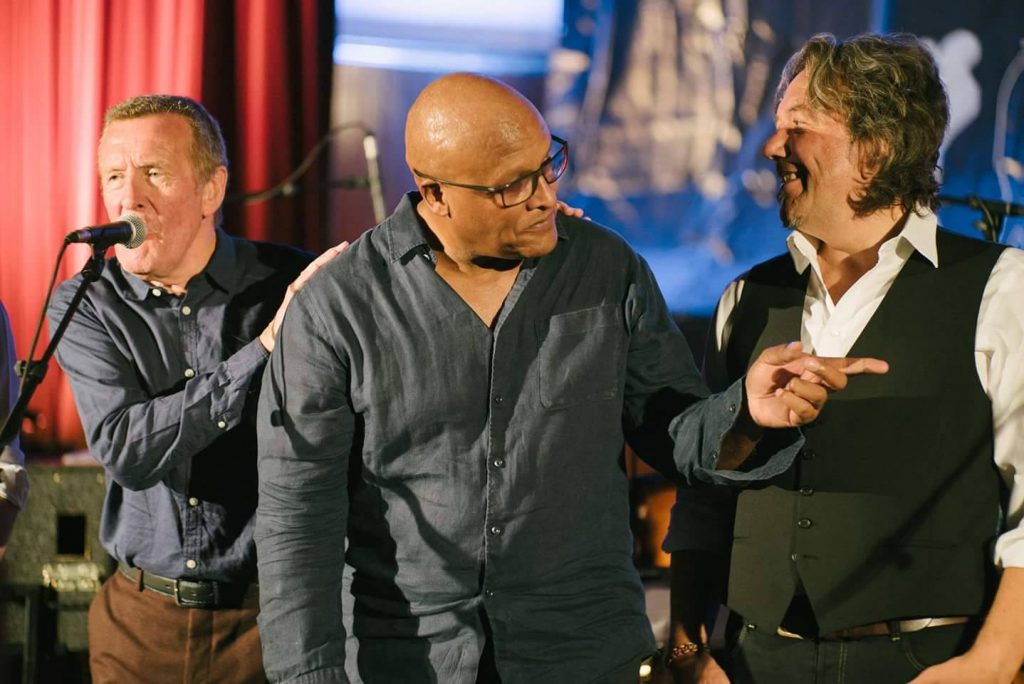 Steve Ferrone played with Molly and Hamish at his induction into the Drummers Hall of Fame in 2014. That reunion led to the formation of 360 and the recording of a new studio album bringing the founder members together again.

After the demise of the AWB in 1982, Steve joined Duran Duran: followed by a long spell with Eric Clapton. Steve subsequently became the drummer in Tom Petty’s Heartbreakers – where he has remained for the last 24 years! Molly has been much in demand as a session player and soloist all over Europe and has toured with the likes of Ray Charles, Buddy Guy and Eurythmics. Hamish joined Paul McCartney’s band in the late 80’s for 6 years of record-breaking world tours and 5 albums. He has since peppered his own solo career with US tours as part of Ringo’s All Starr’s – in addition to writing and touring with his own band and producing albums for an array of artists.

In early 2014 Steve was inducted into the Drummer’s Hall Of Fame in LA. Molly and Hamish flew out to join up with a handful of stellar musicians to honour their old band mate and friend. All three clicked as if no time had passed since they’d last played together and enjoyed the experience so much that they vowed to do it again when schedules allowed. July 2015 provided the perfect window of opportunity. The guys were getting ready for a handful of sell out shows at Ronnie Scott’s and Edinburgh Queen’s Hall, when the offer to record an album materialized – so they returned to the recording studio to do what they do best.

Molly and Steve each brought a song to the album and the rest is made up of a handful of songs from Hamish’s recent repertoire, plus a couple of classic covers. “Too Hip” is the final track on the album and an epic story about their friend and AWB’s original drummer: Robbie McIntosh, clocking in at seven minutes long.

360 will be performing songs from their new album (also entitled ‘360’) plus a selection of AWB classics during a series of live concerts. Molly, Steve and Hamish will be joined on stage by a host of the UK’s finest musicians (many of whom also played on the studio album) including: Steve Pearce (bass) Adam Phillips (guitar), Ross Stanley (keyboards), Andy Caine (guitar and vocals), Tom Walsh (trumpet), and newcomer Patrick Hayes (trombone).

This reunion of three highly regarded musicians who have achieved so much together and separately, has produced a landmark album showcasing how their various talents have matured.