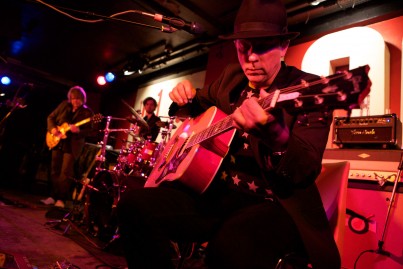 Petit’s playing style, described by Classic Rock Magazine as containing “The fire of Freddie King, the instinct of Jimmy Page and the soul of Eric Clapton” moved former Rolling Stone Mick Taylor to comment: “He’s got his own unique take on contemporary blues… I’ve heard him do a great live version of Freddie King’s “Have You Ever Loved a Woman?” It was wonderful. All his albums are very interesting, he deserves the recognition.

On 1st December 2010, Petit organised a benefit “Save The 100 Club” concert to raise funds for the historic venue to prevent it’s imminent closure. Petit was joined onstage by former Rolling Stone Mick Taylor, Pretty Things guitarist and former Rolling Stones bassist Dick Taylor, Rolling Stone guitarist Ronnie Wood and British Blues forefather jazz trombonist Chris Barber for the concert. The 100 Club benefit served as the first time three generations of the Rolling Stones’ historic line up had performed onstage together. Proceeds from his single “Need Your Love So Bad” went towards the effort to save the venue from closure. In its review of the show, leading live review site allgigs.com praised Petit’s performance: “Petit’s solos, variously expansive, chunky or crying, are a living, of-this-electrifying-moment history of the guitar, from old school Delta beginnings to listen-to-this, in-your-face nu-school and beyond”. Petit has played at The 100 Club on Oxford Street more than twenty times, and considers it to be his spiritual home.

In June 2012 a vinyl only live album Stephen Dale Petit At High Voltage was released in a limited edition pressing. The album was described as “just about the greatest live record you’ll ever hear” by Classic Rock’s The Blues magazine.